I don't write that many post-game stories but the Thrashers/Wings contest had a couple of interesting  story lines. First, it was Marian Hossa's first game back in Atlanta since he was traded away a little over a year ago. There was a mixture of boos and cheers for him. Frankly, I don't see the point in booing a player who was traded. The man played hard here and gave me some great hockey memories with his goal scoring exploits. For years Hossa had zero control over his place of work (in fact Hossa negotiated a 3 year contract with Ottawa only to discover that he had been traded to another city after he signed the deal). Hossa paid his dues and fulfilled his contractual obligations and earned the right to pick his own employer--I don't hate him for that--I would probably want the same thing in his shoes.

Another interesting storyline was the resurgent Thrashers and the struggling Detroit netminders. Both of those trends abated--for one game at least. The Thrashers played significantly better than the score will show and could have easily have 2-3 goals in the 1st period as they got great penetration right around the Wings net. I've always said that Osgood's greatest strength as goalie is his uncanny ability to make point-blank saves and he showed that multiple times last night as he robbed several Thrashers right on the door step. Osgood has been one of the worst goaltenders in the NHL this year in SV% after winning the Cup. He looked more like that a champion than a chump in Atlanta.

Another story was that for the first time all season Philips Arena was really full. We got there early and it was a good thing as parking and concessions all took longer in a sold out arena. The Red Wings "travel well" as they say in college sports and it certainly showed last night. Here's a shot of the end zone after the Wings scored, it seemed to me that there were as many Wings fans as Thrasher fans in the stands. 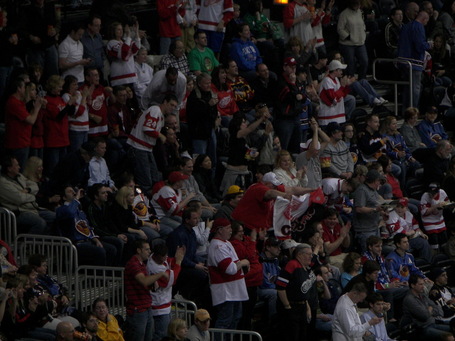 Many fans on the message boards were irritated by all the Wings fans but I've seen the same story play out when Detroit visits Nashville and Washington. Let's face it, the Red Wings are exactly what every NHL team should aim to become--a well managed perennial contender with great players and passionate fans. They are the NY Yankees of hockey with the jerk owner.

Here's a shot of some guy with ridiculous head gear. 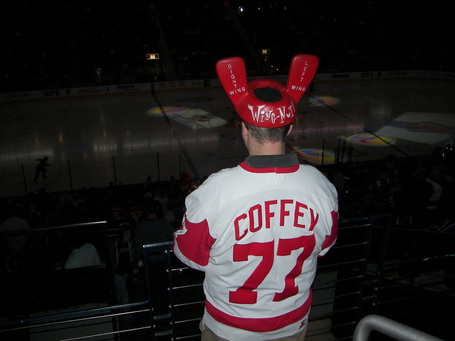 This contest was cloer than the final score, but it did not live up to the crazy 6-5 OT win of a few years ago. I've enjoyed the Thrashers recent hot streak but this season is lost and I'd rather have the high pick than a bunch of moral victories. Tampa really could use those two points tonight :)