Rendezvous with an Old Flame: Atlanta vs Calgary

Share All sharing options for: Rendezvous with an Old Flame: Atlanta vs Calgary

Tonight your Atlanta Thrashers play against the Calgary Flames of the Western Conference. Game notes after the jump.

In the first month of the season, the Flames had one of the best shooting percentages in the NHL. The Thrashers were also in the top 5. I thought it would be worthwhile to take another look: 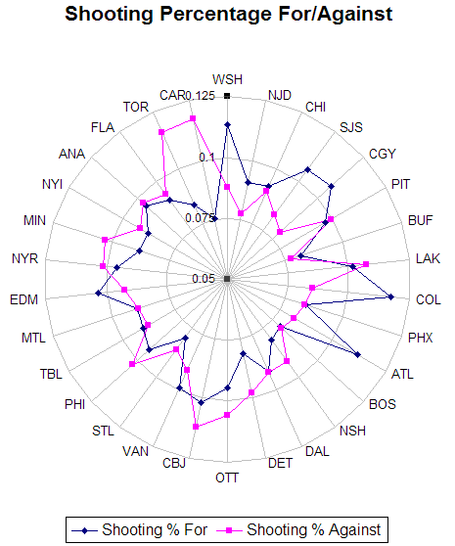 Right now the Flames are 5th in the NHL in Points Percentage thanks to some great shooting and strong goaltending. They are exceptionally good at even-strength with a 5v5 GF/GA of 1.35 (2nd in the NHL, behind only Washington) and have middle-of-the-pack special teams. Once again, it is captain Jarome Iginla who is leading the Flames in scoring with 17 goals and 13 assists in 29 games. But to me, the most impressive thing about the Flames is that only two skaters are minus-players... and only -1.

The Flames are strong-starters, with more goals in the first period than the second and third. This could present a problem for the slow-out-of-the-gate Thrashers. Hopefully the late start will give them some extra time to get their heads in the game.

Tonight's Questions of the Game: