flerd proposed this question on another site regarding Kovy and the value of his 40-50 goals per season:"I’ve been thinking that since Ilya has scored 40-50 every year yet is consistently a minus player, a thirty-goal, plus player might be just as valuable.Is a guy who scores 30 but is only on the ice for 20 against more valuable than a guy who scores 50 but is on the ice for 70 against? I’m considering the same TOI."

It seems like there have been a few instances that stand out lately of goals resulting directly from Kovy’s lack of defensive play which would cancel out a goal that he scores in the same game. Have you any insight, Mr. Falconer, on the relative value of goals vs +/- ?

Well, okay, I'm not The Falconer, but I can put some Excel skills to use and attempt to answer this question anyway.

My gut reaction to this question was that I'd much rather have the 30-goal scorer with a good +/-. After all, you need to score more goals than the other team to win. Plus-minus takes into account goals-against. You can score 5 goals every night, but if you give up six, you lose. That said, an argument to the contrary goes like this: "Well, a guy like Kovalchuk leads to a lot of goals against at even-strength, but he scores enough on the power play to make up for it." That was never a convincing argument to me, but it's a hard thing to prove with stats.

Take the jump and I'll try to prove it with stats.

What I want to do is see which metric is a better predictor of a team's points percentage: Team +/- or Goals Forced. It's very hard to do this for individuals as there's no way to accurately decide whether a player won a game or lost a game for your team. I think these metrics are good enough for our purposes. Is +/- or goal-scoring more important to winning games? (I could also do this for power play goals forced, a more specific version of the same idea if anybody is curious.)

The results are pretty unambiguous. 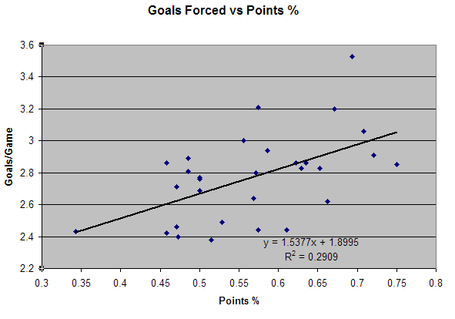 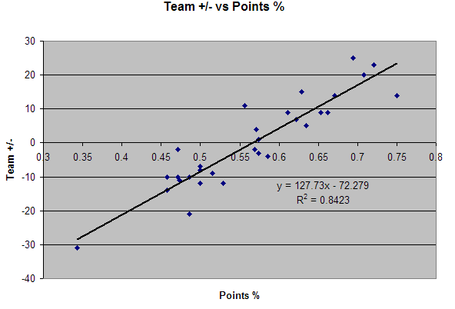 The thing to focus on is the R-squared value. The closer that value is to 1, the better our linear model. With an R-squared of 0.29, Goals Forced is not a particularly good predictor of a team's points percentage. Intuitively, that makes sense. Resorting to a Madden-ism, "You've got to score more goals than your opponent if you want to win the game." Goals Forced doesn't take Goals Against into account.

Team +/- does a really good job predicting points, though. An R-squared value of 0.84 means that our model explains the majority of the data. Those teams that fall far from the line, the outliers, are the teams that are winning or losing based on special teams. There's really only 4 or 5 of them.

The reason this all came up? Ilya Kovalchuk. Is there value in a player who consistently scores goals, especially on the power play, but also consistently watches them hit the back of his own net? Would it be better to have a player who scores less than Kovy but plays a stronger defensive game?

There's one other benefit that may not get as much attention: the guy who scores 30 goals with the good +/- also will make less money than our 50-goal scoring superstar. He'll almost certainly be undervalued, sometimes by quite a lot. This means you can actually get more of these types of players on the ice. The value compounds over time.

I should state, for the record, that I'm not suggesting (here) that we trade Ilya Kovalchuk. That's highly dependent on the players and picks we'd get in return. If that return is a defensively-sound 30-goal scorer, a top prospect, and a 1st round pick? It's hard to say that a package like that won't make our team better, even if it has less star power.