Share All sharing options for: Thrashers Better When Outshot?

I love hockey for many reasons, including how statistically interesting it can be. That's why I spend so much time blogging about hockey and studying stats. But to call myself a stats-guy and not call into question some of my peers would be remiss.

There is a thread of conversation going around that is something like this: "shucks, have you noticed the Thrashers win more games when they're outshot?" Graphs and other representations abound. To make things worse, these graphs and representations are coming from some of the bloggers that I admire most. Admittedly, it's often indirect, but they leave open the door for readers to make the wrong conclusion.

Folks, let's set the record straight: despite what you may have seen, getting outshot is not a good indicator of success. As it would turn out, we do score more goals than our opponent (the necessary condition to win a game, thanks Mr. Madden) when being outshot, but there just isn't enough data to establish causality. 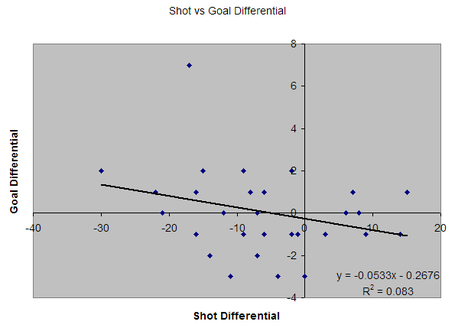 So while it's perhaps interesting to note that the Thrashers win more games when they're outshot, don't let yourself think it's a real trend. It's just a statistical anomaly.