Just in case you are late to the party, there has been an ongoing meme over at the NHL board of www.HFboards.com about our own Rich Peveley. It started out with a thread titled "Is Rich Peverley the new Mike Richards?" and the posts took on a life of their own from there.

Last Saturday was the first head-to-head meeting of these two players which spawned a new thread titled "GDT  Richards Vs Peverley" which is filled with all kinds of hilarious predictions about this epic, no, titanic, no, earth-shattering matchup. If you're having a slow day at work, I encourage you to waste a few minutes by clicking over and reading the comments and looking at the photoshops. Fittingly the game ended 1-0 and the only goal was scored by--you guessed it--Rich Peverley. All Hail the Conquorer! 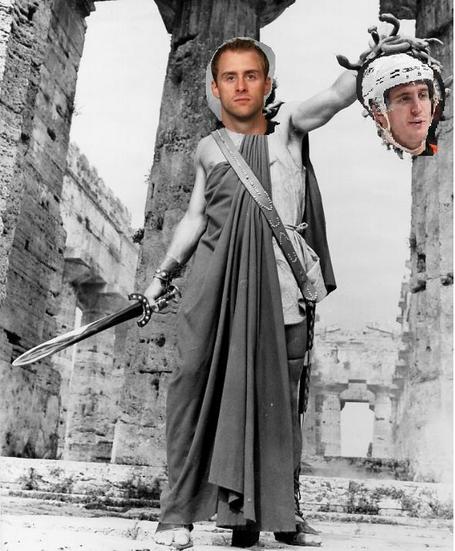 Towards the end, one poster (with mandatory Interweb typos) comments: "I imagine ,on day rich peverley will stumble upon the HF boards during his time off from being jesus and find this thread and call all of you a bunch of freaks and stalkers"--which struck me as the most sensible statement in the entire thread.

As a long time Thrashers fan, I've grown accustomed to seeing our un-sung heroes go un-sung. It is refreshing to see our own Rich Peverley become an internet phenomena among NHL hockey fans. Even if it is a bit tongue-in-cheek, it is nice to see people play up a successful Thrasher.