O Canada! The Thrashers Return to Montreal for Game 11

Share All sharing options for: O Canada! The Thrashers Return to Montreal for Game 11

Atlanta Thrashers at Montreal Canadiens
November 3rd, 2009 - 7:30 PM
Local TV: None - Local Radio: 680 The Fan - Montreal TV: RDS (HD)
Canadiens' SB Nation Affiliate: Habs Eyes On The Prize
Hey everybody, it's time for the Thrashers' 11th game of the season and their 2nd at Centre Bell. Last time these two teams met, the Canadiens defeated the Thrashers 2-1 with a shootout victory. The Thrashers were out-shot 35 to 23, though much of that came in overtime where the Thrash were out-shot 7-to-zip. The game was widely billed as a "goalie duel" between netminders Ondrej Pavelec and Jaroslav Halak.
Keep on reading after the jump.

The Thrashers have found some difficulty finding points since the shootout loss in Montreal, going just 1-3 after starting the season 4-1-1, though not for a lack of goal scoring. Even without superstar Ilya Kovalchuk, the Thrashers have been able to score 3 goals or more in 8 of 10 games this season. Their 3.4 goals/game is good for T-5th in the NHL. And their 2.80 goals against/game - 13th in the NHL - isn't all that bad, either.

So how are the Thrashers just one game above 0.500?

Of their 5 losses, 4 have been by a single goal. Playoff teams win close games... or at least get a point. The Thrashers have shown a remarkable ability to get back into games, but they'd be better off not getting behind by 2 or 3 goals.

The next key? Press Your Advantage on Special Teams. The Thrashers are doing well on special teams this year with a PP% of 27.8 and a PK% of 82.2. A good way to measure overall special teams performance is to add those two numbers together: you want that sum to be over 100. The Thrashers PP/PK combined metric is 110.0, good enough to tie for 3rd in the NHL. Montreal, on the other hand, is having a hard time: 15.1 + 75.8 = 90.1. That's a big difference. A special-teams fest doesn't favor the Thrashers quite as much if you look at the Thrashers' combined road PP/PK numbers vs the Canadiens' combined home PP/PK numbers, the advantage a reduced 114.8 to 97.3.

The last key? Goaltending Goaltending Goaltending. Ondrej Pavelec has been mostly amazing between the pipes for the Thrashers. To pick up two points on the road against Montreal, he'll need to keep it up. After a 50-save performance against the Senators, Pavelec should have his confidence back.

One more thing: after five games, I posted a graph showing the shooting percentages for and against for all 30 NHL teams. Here's the same graph updated to the most recent data available at the time this post was written. (Data includes games through Nov 1, 2009). 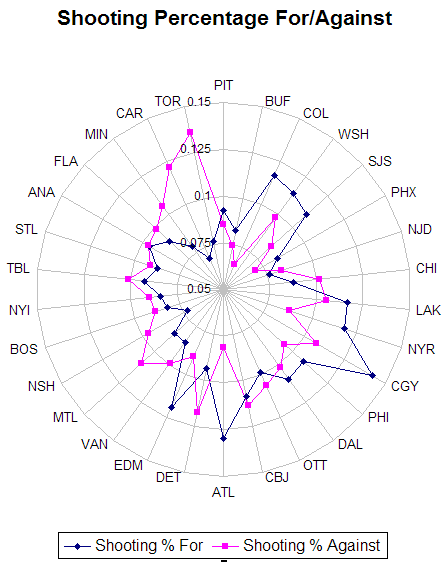 Note that the teams are arranged clock-wise by points percentage as well. The Thrashers are still shooting at a much higher percentage than their opponents and better than everybody but the Calgary Flames. They'll need to keep it up if they intend to win games while being out-shot so badly.

I've been somewhat concerned about the team's play lately, but there is one stat that keeps me hopeful: the Thrashers 5-on-5 goals for/goals against ratio is 1.11, tied for 13th in the NHL. That stat is the best predictor of where teams will end up in the standings at the end of the year. As it is, that has them 7th or 8th in the Eastern Conference. Cross your fingers.