A great start. It was a wild and woolly game, but the Thrashers got a big win in front of a full building. The superstar had three points, the young goalie was good enough and a role player (Peverley) saved their bacon after Tampa made it close.

The Kovalchuk line played huge minutes and the 4th line was rarely on the ice. During the game it seemed like Bogosian was out there frequently, but his Time On Ice (TOI) was just under 21 minutes. It was not a good Corsi night for the team, they were out-shot badly--but it was one of those games were the scoring chances seemed fairly even to me . Peverley was the only person with a positive Corsi Number and Kozlov, Kane and Salmela finished with an even Corsi number.

The game was a bit messy for both teams as they are still working out the kinks. The Thrashers got lucky on Kovalchuk's first goal (went off defenders stick blade) and Bogosian's goal (gaping five hole), but they were unlucky on some other chances (Kovalchuk missed a slam dunk pass and couldn't reel in breakaway pass).

One thing I really liked was Kovalchuk trying to stand up for Enstrom--this is a continuation of good team cohesiveness that we saw in pre-season games. I also liked that Boulton and Thorburn both fought--we need more from the 4th line and this is one way they can contribute.

Salmela and Popovic: I thought this D pairing was very effective all night long. Valabik might sit on the bench for a while if they keep this up.

Kovalchuk: Tremendous energy and enthusiasm all game. When he plays all cranked up like this, it spurs the whole team. He can't play 27 minutes every night, but the Thrashers are off for 5 days after this game. He still had one brutal shift defensively where he just failed to cover his man, and eventually he took a penalty giving the other team a PP opportunity.

Pavelec: He made some key saves in the 3rd. His D bailed him out twice by squatting next to the far post. He's not nearly as quick as Lehtonen in terms of going side to side after making the initial save, but he did what he had to do for the win. He will need to play better when facing a playoff caliber team.

Kane: He got better as the game went along, he still gets knocked around by bigger men. Getting his 1st NHL point should spur his confidence and let him relax and just play hockey.

Peverley: I certainly don't expect him to repeat his point-per-game pace of last year (although right now he's on pace for 2 points per game). He reminds me a bit of how deadly accurate Marc Savard was around the net. Like Savard, Peverley doesn't have a laser shot, but if he gets the puck within 10 feet of the net, he will score with a quick release and accurate puck placement.

Afinogenov: My expectations for his scoring are low, but if he simply keeps making terrific passes and playing in the opposition end, I'll be happy with that. No bad turnovers, so it was a positive night.

Bogosian: He got lucky on his goal, but he had 2 other shots that were quality chances. This kid is just freakishly good for someone who is  just 19. His ability to get points at Even Strength coupled with Coach Anderson's style will allow him to score tons of points. The rest of the NHL will probably be stunned by his emergence as an offensive force.

Kubina: He was very solid all night. I'm amazed at how he can use his big body to eat up space and not get called for interference. He is not quick, but he did just fine against super fast Martin St. Louis. Hopefully this guy will just eat up minutes all season long.

Antropov: It is great to have a forward so big that guys can hit him and he can still control the puck.

Little: He is going to get a ton of points because Kovy and Antro will get a lot of attention, but last night he was getting tossed around like a rag doll on hits.

Boulton: I've been critical of the Thrashers 4th line, but his pass to Anssi Salmela was perfect, a well deserved assist.

Okay, so I'm a little late on this. Excuse me - I've been traveling for work. (I'm writing this from beautiful Wilmington, DE.) It's hard not to be happy with this game, but I might be a bit more reserved in my happiness than the rest of Thrashers fans. While the game itself was awesome, there were some unsettling things. So let's take a look at the good, the neutral, and the downright shameful:

Don't start the celebrations too early: we won our home opener against a division rival by 3 goals (before an extended road trip) last year as well. I thought most of the team looked pretty good, but I'm not ready to celebrate just yet.
I'm a stats guy, and a single game isn't really enough to crunch stats on. I'll have more to say over the next 10 games. I hope that this game is representative of the team this season, but it could just as easily be an outlier. So there's your crushing pessimism for the day.

Ilya Kovalchuk is everything you wish you could be. /homerism

Any game where Todd White gets a roughing minor is okay with me.

Rich Peverley's next contract? $1.5 million a year over three or four years.

Eric Boulton's job is to light fires and ruin lives, and he did it well tonight. The sweet assist was icing on the cake.

HC Johnny A quote of the night: "Ruh roh."

DO NOT take your foot off the gas when you've got half a mountain to climb.

Last year: 7-4 opening night win over the Capitals, and then a 1-6-2 October. This year will be won or lost over the next 5 games.

And here is your inaugural Rich Peverley/MOAR! LoLThrash of the season: 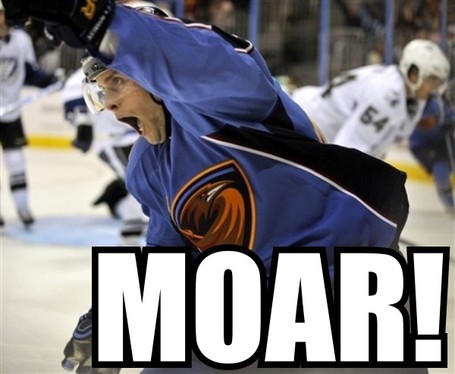 Mr. Shake's Take: Overall, an exciting game. The crowd was fantastic. Nice season opener, reminded me very much of last season’s. As Kovalchuk stated, “last year, we won the first game too,” so let’s hope it doesn’t go down the same way over the next 10 games. But based on the difference in skill level out there, I don’t think it should mirror that at all.

Tampa Bay played a pretty good game as well, and I expect them to be better this season. Victor Hedman is going to be a key piece for them. He played the most minutes on their side. He was exciting to watch. By the way, anytime you want to give the Thrashers a freebie Tampa, go right on ahead, don’t mind at all.

Players that stood out for me:

Pavelec: He was terrific out there. Granted he was flipping and flopping a few times, but the kid seemed to give it his all the entire game. If any of you Legace supporters didn’t see him over prospect camp, Pavelec played a very similar game to Legace’s last night. But please Ondrej, stay in the crease a little bit more. Those dives where he’s leaving the net wide open can be effective, but also heart-stopping.

Peverley: I’ll admit, I was a doubter going into this season, but the man was impressive last night. I do not expect three point nights to continue, but he was in all the right places offensively and defensively. He is fine on the third line in Atlanta, so no need to complain he cannot be as effective as last year.

Kane: He battled very hard once he let the butterflies leave his stomach. His first couple shifts, he seemed scared, but he settled down and started playing his game. When he gets bigger, he should really help out this team. Good for him on getting his first point in his first game.

Salmela: He looked great tonight. All preseason he hasn’t been visible, which does not necessarily mean a bad thing, but he made some good outlet passes and had a terrific goal. All the defensemen seemed to be joining the rush or the play down low at times, and the extra man paid off on his goal.

Enstrom: He got hammered into the boards early on. If anyone missed this hit from the World Championships this spring, that surely flashed through my eyes. But he got right back up and played hard the rest of the game, so no harm there.

Kovalchuk: He was on fire last night. It was stated early on that coach John Anderson could see he wanted to get going right away. Well you could sure see it out there last night. I read earlier in the day before the game, that the coach planned on having two power play units out there. I didn’t see Ilya giving up his spot last night, and my guess is Anderson knew it was better to keep him out there. He was all over the place. A couple of defensive lapses, but he really wanted to score last night, and was looking for the breakaway. He knows it’s his team and he wants to get them started the right way.

Afinogenov: Speedy as usual. Trying to create space. That is what he is best at and once that second line gets a few more games under their belt, should be a bigger threat.

Bogosian: Great game, did not see any nervousness like last year. Nice goal albeit lucky, but so determined. He skates so well, it’s often difficult to see him moving his feet, as he just glides past other players. I believe he wants to challenge Mike Green for goals very soon.

Boulton: Monster hit in the first period that had Mezaros yelling, “look out!” Good scrap in the third to rally the guys to put the game away. Personally, I think he’s a necessity in the lineup as that character guy. Oh...and I believe he had a decent pass that put him on the score sheet as well.

Antropov: He hits and he brings the puck in the zone. Really tries to use his size. He plowed through defenders along the boards a couple times to get the team in the offensive side of the ice. Nice to have a guy that can avoid the dump and chase.

First one down, 81 more to go. It was a sloppy start, but had a bit more rhythm half way through. Once they figure out how to bring those shots against down, this team will be quite competitive.

They can definitely score some goals.