Game 6: The Shapes of Things - Thrashers head to Montreal, Look to Improve to 5-1-0.

Share All sharing options for: Game 6: The Shapes of Things - Thrashers head to Montreal, Look to Improve to 5-1-0.

Heading into the sixth game of the season, who would've guessed things would look like this? The Thrashers are 4-1, riding a lethal combination of a very potent offensive attack, solid special teams work, and a goalie team that has been at times downright stellar. On the flipside, you have Montreal. The Canadiens, after a promising 4-2-1 preseason, have gone a lackluster 2-5, making this summer's big roster turnover look like a failed experiment, and putting the franchise in danger of their worst start in 68 years. To be fair, Montreal has already lost 4 players to injury, including defensemen Andrei Markov & Ryan O'Byrne. Defense hasn't been the only soft spot though, as the Habs offense has produced a little more than 2 goals per game, giving vaunted netminder Carey Price precious little support. Given the acquisition of high profile players like Mike Cammalleri, Brian Gionta and Scott Gomez, the hockey-mad market in Montreal isn't liking these results. The Canadiens forward lines have shown flashes of what could be, but the team has yet to gel.

Any of this sound familiar, Thrashers fans?

Jump for takes from the BWA-Team.

What the Thrashers Need to Do:

Keep playing as a team. The hustle has been outstanding since the loss to Ottawa, the wins have kept on coming. Everyone knows their job and no one is overreaching or underperforming.

Capitalize on Montreal's porous defense. The Thrashers have been scoring in bunches, and then letting off the gas later in games. I would recommend stopping this practice, as it may come back to burn them in the future. The motivation to knock off a hot team must be running pretty rampant through the Habs dressing room right now.

Take that PK magic and work it full-strength style. The Canadiens' forwards are not exactly the largest of men, so keeping them to the perimeter for some awkward angle shooting might be a good idea.

Don't look now, but the Thrashers are 6th in the Eastern Conference with at least one game in hand against every other team in the conference. They're 2nd in the Southeast Division with 3 games in hand against Washington, but only 2 points to make up. You could do worse than to think of the Thrashers as the current top team in the Southeast Division. (This gets to a point which I'm sure we'll make repeatedly before next game: these two Thursday games against the Capitals are exceptionally important.)

I'm not a betting man, but those of you who wager may have noticed that the Thrashers were not favorites to win the last four games. Their Stanley Cup winning odds are still 100:1. Where we see a vastly improved team, "experts" and non-fans are not necessarily convinced. I can understand some of their skepticism: we've been badly outshot (no Thrasher has a positive 5-on-5 Corsi number) and the majority of our scoring has come from Kovalchuk plus our 3rd line. If Kovalchuk slows down or the 3rd line stops seeing such favorable matchups (those three guys bottom out Behind the Net's "Quality of Competition" stat), the Thrashers could see a quick change in games.

Then again, remember this: national sports writers don't watch Thrashers games (with a couple exceptions) unless the Thrashers are playing a team they are interested in. How many times did we hear all about a supposed Kovalchuk-Hossa line that didn't exist during the Bob Hartley years? It's the same thing now - they might have better fact-checkers, but the truth is, there's not a lot of Thrashers-specific knowledge in the national media.

(That's why you're reading BWA, I assume.)

With all that said, here are the things I'm going to be watching over the next few games:

Can Ondrej Pavelec keep it up? It's not easy for a goalie to face 40 shots every night, especially when that goalie is young and playing as a starter for the first time. With goalies, you have to think of shots the same way you think of ice time for skaters: the more ice time they play, the more likely they are to get injured or get flustered on the ice. If Pavelec continues to see such high shot totals, it'll start to wear him down. If we want him to stay healthy and play 60 or 65 games this year, our defense is going to need to step it up a bit. The biggest problem with shots against appears to be the 3rd D pairing, specifically Mark Popovic. There's a stat that we can use to see a player's relative effectiveness at producing and denying shots called "relative Corsi." 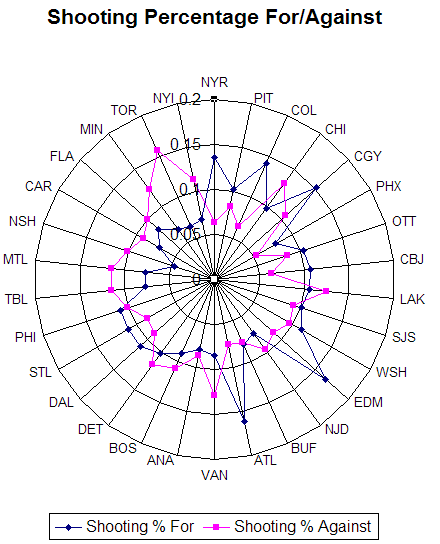 Edmonton is WAY up there because of the game against Nashville. The Calgary Flames are, like the Thrashers, scoring in bunches. The Thrashers are a bit of an outlier, though. It concerns me that we could start to trend downward in that stat.

I was hoping to write a longer post on shooting percentage, but I feel like I've said enough for now. This is something I'll be monitoring over the next few games.