Thrashers Head to the Rock For Some Southeastern Revenge

Share All sharing options for: Thrashers Head to the Rock For Some Southeastern Revenge

Good Lord, far too much time between games.

It's kind of like being quarantined at Christmas. You're sitting in your room upstairs, listening to everyone unwrap hat tricks and trading stats about "so-and-so's scored his highest point total to date since blah blah blah," and "so much for truculence, the Leafs are just as bad as they ever were."

Anyway, just to hit a couple of points I discovered whilst cruising the Gore-acle this afternoon: 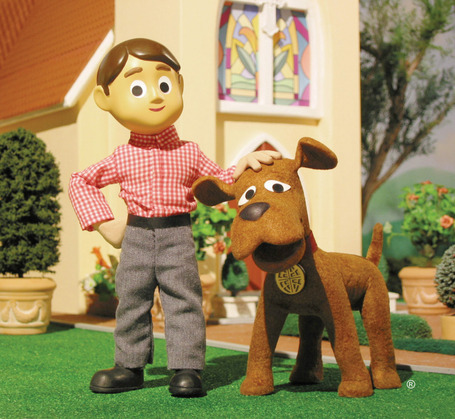 No, this is Davey & Goliath. Subtle but important difference.


The Thrashers can beat this team, and they should. I second Falconer's "4-3, Thrashers win" prediction.

Who's excited about hockey!?!?!

Tim's Take: I sure am! The Thrashers have played just 3 games, the least in the league. In fact, just two teams have played 4 games - the Islanders and the Sabres - so the Thrashers qualify as an outlier. Sitting at 10th in the Eastern Conference, the Thrashers are actually doing pretty well this season. We're one game over 0.500, just like the Washington Capitals. Aaron covered the bases, but I figured I'd chime in with a few thoughts.

I mentioned this on Twitter, but I'll say it again here: I think we need a shake-up in our lines. My first suggestion: swap Kane and Kozlov. I don't care what you count as the 2nd and 3rd line - I'd give the two pretty even ice time. Kozlov - Peverley - Armstrong was one of the best lines last year and I think Kane could grow into his role as a power forward better on a line that doesn't already have one. Just my two cents.