Long time readers of Bird Watchers Anonymous know that I favor the statistical approach to sports analysis. I frequently use "new" hockey stats like Corsi Numbers, Goal Differential and Zone Shift. The field of advanced hockey analysis has been advanced by many people, but Gabriel Desjardins has made an enormous contribution by creating and maintaining a site that collects and displays data buried in the NHL.com play-by-play sheets. I've used his Behind the Net stats site since it first appeared after the lockout. At a minimum, his site has made life much easier for those of us who are not adept at computer programming (like me!).

We at  SB Nation are very happy that Gabe has joined the site. He will be contributing posts at his Behind the Net blog on statistical analysis of the NHL. Gabe was kind enough to take a few minutes to talk about what to expect from his blog, how he fell for NHL hockey and some of his thoughts on two Thrashers statistical controversies.

Question #1: What sort of topics can readers look forward to reading at Behind The Net in the future?


GD: I'd divide it into three categories: 1) pieces that introduce important statistical concepts in hockey, and survey some of the work that various people have done (feel free to link to the 10-part series I just wrote); 2) answering questions that SBNation bloggers have about their teams; 3) columns that explore the statistical data that gets collected every game--we've still just scratched the surface of answering important questions like, "what characteristics winning teams or players have?"
(more after the jump)

Question #2: What is your background as a statistical blogger? Do you have a day job in math or computing that helps out?


GD: I have a BS and MS in Electrical Engineering, and I took enough math classes to get a minor if we'd had them where I went to college.  In my day job, I design audio chips, which involves math, computer simulation and statistical modeling, but is actually quite tangential to sports analysis.  In electrical engineering, you'd throw out a model if it was only 90% successful in predicting performance.  In sports, we'd be overjoyed if we could get to 90%.  You need to use very different tools as a result. 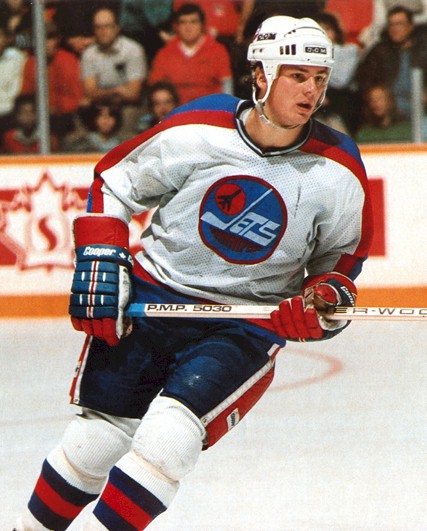 Question #3: What is your background as a NHL fan? Were you a fan of Hawerchuk and Jets growing up? (His screen name is "Hawerchuk")


GD: First game: Feb 18, 1983, Jets-Bruins -- a pretty good 6th birthday present.  My dad got me a Jets jersey with Hawerchuk's #10 on the back.  I remember getting to the arena and being surrounded by other people with Hawerchuk jerseys - and being really shocked that I wasn't the only one!  The 1984-85 Jets were amazing (though looking back, I realize they outplayed their expected performance quite substantially) but Jets fans were crushed repeatedly in a short period of time: Jamie Macoun rupturing Hawerchuk's spleen in the first round of the playoffs; the Oilers steamrolling a team that didn't have its star in the second round; and then perhaps the greatest tragedy in modern Winnipeg history, John Ferguson trading Dave Babych to the Hartford Whalers for a bag of pucks.  That broke my heart, which was further ruptured by the team moving to Phoenix.  I didn't really come back to hockey until a few years ago, despite going to college 90 minutes from Montreal, Ottawa and Toronto, I saw one live NHL game in four years.

Question #4: Kari Lehtonen consistently faces more shots per game than backup Johan Hedberg. Some fans argue that Lehtonen gives up more rebounds, while others think Lehtonen gets more tough starts. Have you seen any evidence to suggest that goalie tendencies lead to more rebounds, and therefore, boost the Shots Against per Game?


GD: At 5-on-5, Lehtonen gave up rebounds (defined as shots within 4 seconds of a prior shot on goal) 9.0% of the time over the last two seasons.  Hedberg was 8.7%.  The league average is 8.6%.  Down a man, Lehtonen was 8.4% vs 8.1% for Hedberg.  That's seven extra rebounds over two seasons, and maybe 2 or 3 goals against.  There is also zero year-to-year correlation in rebound percentage.  So it's not rebounds that are the issue, it's the caliber of the opposing teams and how many shots they direct at goal, and potentially any injuries Atlanta had.  This would make a very interesting column, btw -- do we expect Lehtonen to face the same number of shots that he did last year, and Hedberg?
Editorial Note: Desjardins decided to take a longer look this question in a new blog post.

Question #5: In the 2nd half of last season, the Thrashers were a break-even hockey team despite being outshot significantly most nights. Some team officials say scoring chances matter more than net shot differential, but general analysis of the NHL finds that Net Shots or Net Shots Attempted (aka Corsi Number) appear to be correlated with Even Strength Goal Differential. Do you think a team can consistently be outshot and yet stay even in scoring chances over the course of a season?

But at even-strength, it's a different story.  I estimate that the combination of the defensive system and personnel can reduce long-term expected shooting percentage by 5-10%.  Presumably, they'd have the same impact on scoring chance rates.  So you could get outshot by as much as 10%, but be even in scoring chances.  That's the Jacques Lemaire strategy.  But most coaches don't have these skills, and it would be tough to fit six chance-suppressing defensemen under the cap and have any money left over for forwards.