Have the Thrashers Turned A Corner?

Share All sharing options for: Have the Thrashers Turned A Corner?

During the 1st half of the season the Thrashers were out-shot badly most nights. So far that trend has abated in the month of January. Consider the chart below which shows the Thrashers shots on goal for and against. As you can see, the Thrashers have been much more competitive in generating shots this month. In prior months it was not unusal at all for the team to allow 10 more shots than they took per game.

Shots on Goal in January

For most of the 2008-2009 season the Thrashers were getting destroyed by the opposition when it cames to shot differential. If the Thrashers manage to simply break even in January that will represent a marked change from the previous months. Consider the monthly totals so far this season (see chart below). The Thrashers have lost the shot battle 51, 75 and 89 shots prior to January. Even if you throw out the +21 posted against Toronto this month the Thrashers are on pace to only be out-shot by roughly about -20 which would still be an improvement.

Shots on Goal by Month

Now the BIG question is whether this signals some long term shift by the Thrashers team. Have they finally learned Coach Anderson's system? Is this driven by less ice time for Jason Williams and Nathan Oystrick and more ice time for Bogosian and Peverley to the lineup? Or is this recent stretch simply the product of a weak section of the schedule?

The chart below puts trends into context. What you see is a 5 game moving average (which makes it easier to assess multi-game trends). The dark blue line shows whether the opposition in any 5 game segment tends to out-shot or be out-shot. The light blue line shows the Thrashers actual shot differential. If you compare the dark blue to the light blue line you can see that the Thrashers greatly UNDER performed most of they year with a brief exception of December 12-20.

Here is what gives me modest encouragement about the team's play in January. Back when they won five games in a row in early November they were lucky--the team was still being out-shot by a wide margin. Then in mid December had a 5 game stretch where the shots were much better but they were unlucky in terms of finishing off chances. Lately the Thrashers are both creating more chances and finishing those chances off. The points earned in January are much more legit than the 5 game streak of Novemeber.

Can the team sustain this over time? is this just an isolated "up" moment? The playoffs are out of reach but if the club could put together a strong 2nd half that might give both players and fans some reason for optomism concerning the 2009-2010 season. 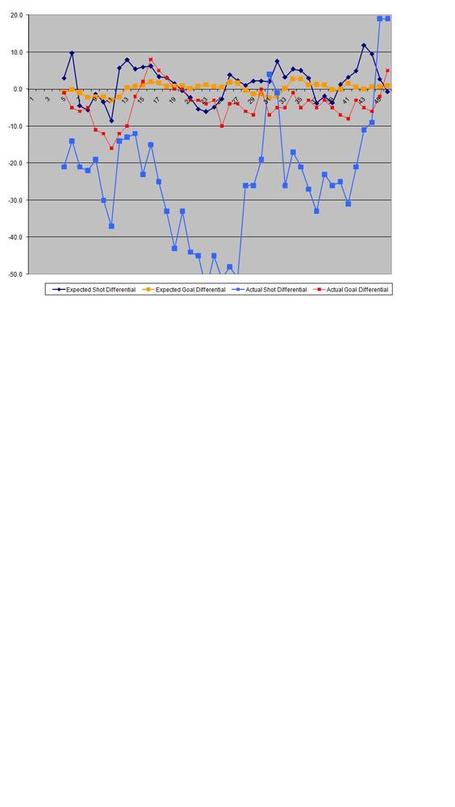