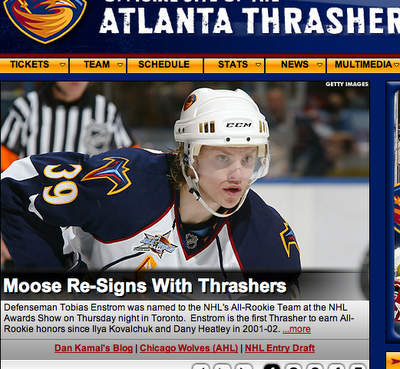 Well in the "opps" department the Thrashers website got a jump on the press release folks and spilled the news that news that Johan Hedberg has apparently re-signed.

Some enterprising fan was able to get a screen capture before it was removed. Note the Headline "Moose Re-Signs With Thrashers" just below the picture of Enstrom. 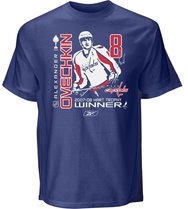 The NHL Awards Ceremony is almost always disappointing. Between all of the wretched bad-pun humor and the terrible music it looks like something your crazy uncle produced in his basement. It makes you realize that the phrase "Canadian Culture" is an oxymoron.

Well, the NHL really had egg on its face this time as it started selling "Ovechkin MVP" shifts well before the ceremony had even been held to annouce the winners. 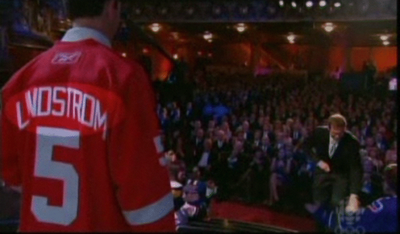 During the NHL Awards Ceremony the NHL had young children play a big role. When five-time Norris Trophy Winner Nick Lidstrom's name was called the kid wearing his stepped forward and revealed that they had put an extra "n" in his name--how in the world do you misspell somebody that famous? Why didn't anyone see it? All they had to do is check the trophy to get the name right. 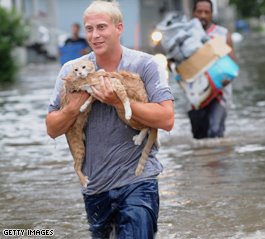 This last picture is for all those folks at the NHL and Thrashers offices who had a rough week. There may have been some snafus this week but at least you're warm and dry which is more than we can say for these two soggy cats fleeing from rising flood waters in Iowa.