Share All sharing options for: Hockey Night in Denver

Your blogger has traveled out to Denver Colorado to spend some time with the family, do some skiing and take in a hockey game. The skiing on Monday was perfect with sunshine and only a 30 degree temperature. On Christmas Day about a foot of snow fell adding to the holiday feeling. We certainly don't see much of this in Atlanta! 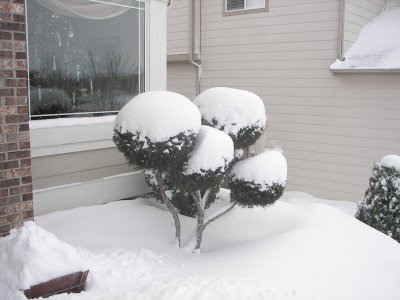 So on Tuesday the young ones opened stocking hung by the chimney with care. 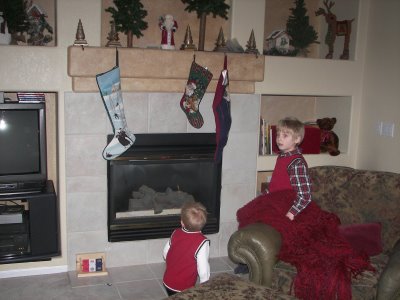 Thursday night I headed down to the Pepsi Center to see the Detroit Red Wings take on the Colorado Avalanche. No complaints about the view from my seat. 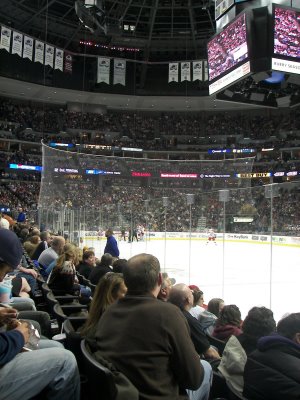 The Avalanche have a few more banners than the Thrashers do at this point. 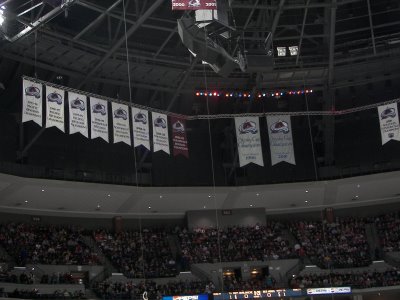 There were a great many Red Wings fans in attendance. This guy had the ultimate jacket to silence any taunting Aves fan. Gaudy? Yes. Effective? Yes. The way the Wings are playing that guy might need to add something this summer. 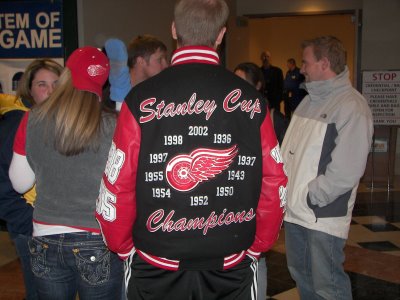 There was at least one Thrasher fan bringing a bit of Blueland to Devner that night. 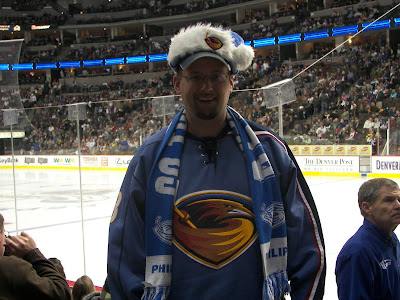 The Avalanche game production staff had a bit of fun mocking all the Wings fans. Here they framed a group with the caption "Santa's Naughty List" and of course the Aves fans were on "Santa's Nice List." 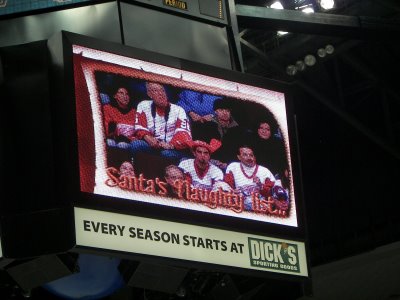 Joe Sakic was out of the lineup so the Avalanche were missing quite a bit of star power. Here is their netminder Peter Budaj tracking the puck. 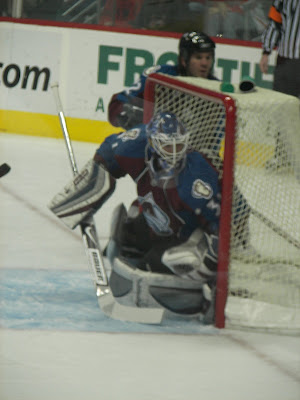 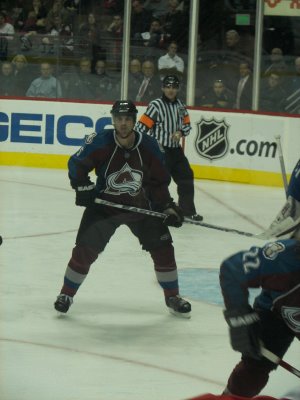 Here is the perhaps the best player in the NHL in the last decade in my opinion. Now wearing the "C" with the retirement of legendary captain Steve Yzerman. 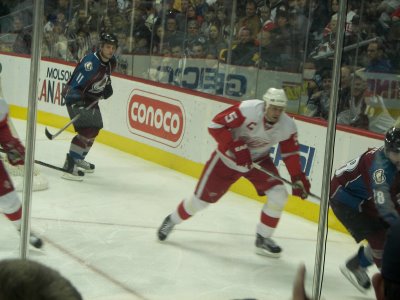 Did I mention that I have a man-crush for Nick Lidstrom? Easily my favorite non-Thrasher playing in the NHL today. 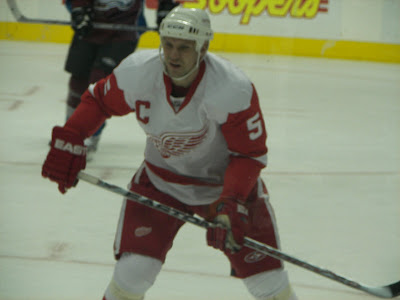 Another future Hall of Famer, Hasek watches a puck sail into the netting behind the goal. Typical game for Hasek he misplayed the puck behind his own net giving Colorado a scoring chance (which they missed) and won the game with his unorthadox stick dropping style. 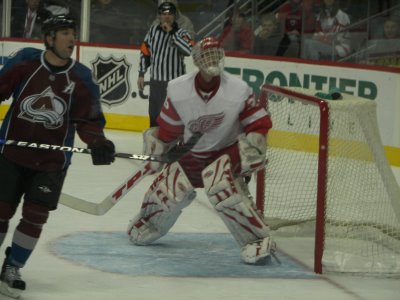 Mathieu Schneider left Detroit and Brian Rafalski took his spot and team never missed a beat. Rafalski looked even smaller in person. Can Tobias Enstrom have a career like Rafalski? 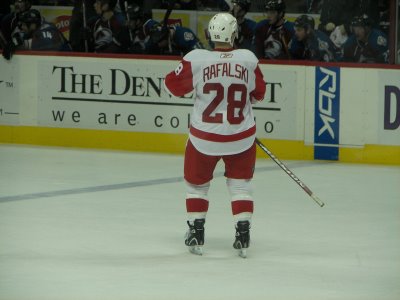 Zetterberg was not in the line up for Detroit but Datsyuk provided some skill up front. 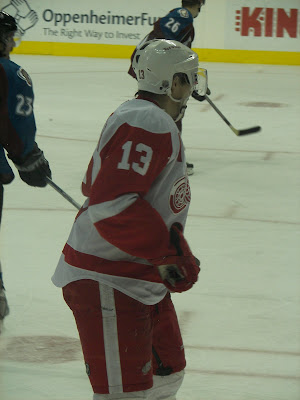 Game Shot #1: Guess which team didn't like the call? 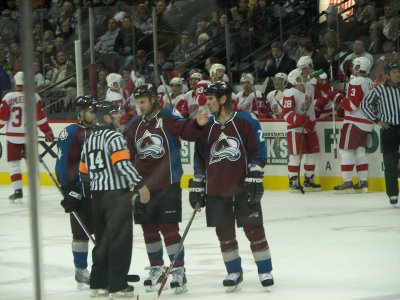 Game Shot #2: The Wings-Aves rivalry is not what it was back in the late 1990s but there is still some hate in the corners. 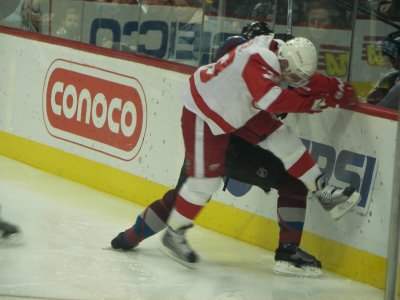 Game Shot #3: Both of these teams can really skate. Here are two players high stepping it out of the zone. 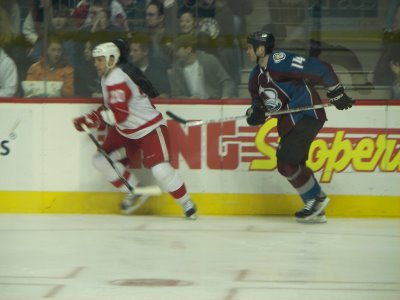 In case you missed the final score, this picture tells you which team won the game. 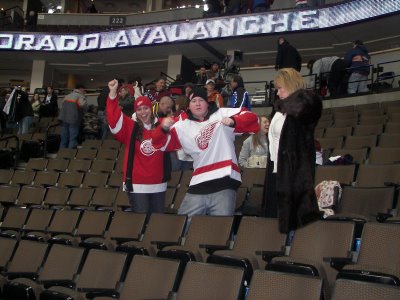 Game Production: Not much comedy at the Pepsi Center other than this intermission entertainment. They had the yellow team and blue team battle it out in a snowball fight at center ice. This was absolutely hilarious. 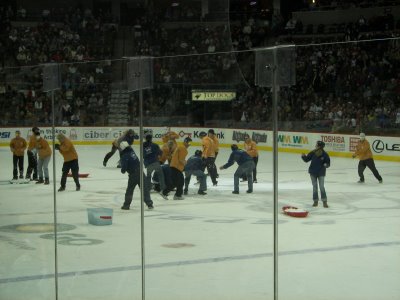 Here is a close up of the sled loaded with nice big snowballs. Considering that the roads were so snow covered that traffic was only moving at 40 mph on the highways this seemed very appropriate as between period entertainment. 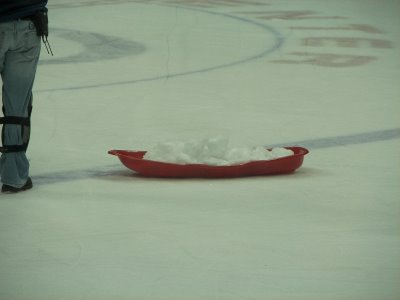 The food at the Pepsi Center seemed quite similar to that in Atlanta and I would say that food prices were about a $1 cheaper per item (on the other hand ticket prices are double what they are in Atlanta). One cool thing I saw was a Carving Station Sandwiches where a guy cuts you off a piece of roast beef or turkey and you make your own sandwich. Pictured below is the Spud Spot where you could get a made-to-order baked potato. 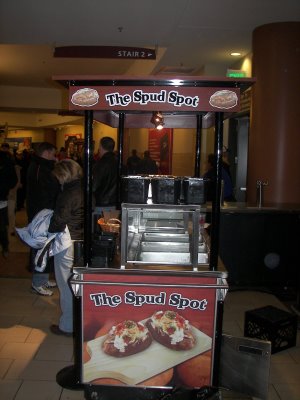 Merchandise: The Avalanche fans have many more options in terms of team gear. For example they offer hats with four different player numbers featured on the front. They also sell (not pictured) hats that read "Sakic" "Stastny" "Wolski" so you can wear your allegiance on your head as well as your sleeve. 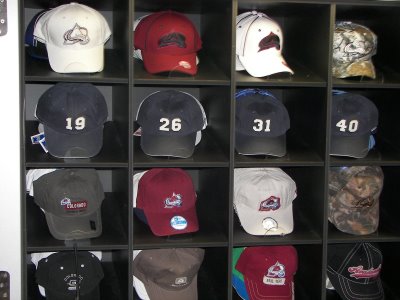 The Avalanche have the largest in-Arena Team Gear Store I've seen in my travels around the NHL (about ten different NHL buildings so far). They even have an annex with stuff of children and women. They have an entire wall that is arrayed with numbered and lettered jerseys. Basically you can walk in and buy the jersey of almost any player on the roster. 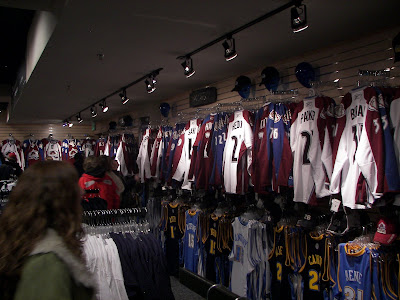 You can also re-create the display of banners up in the rafters of the Pepsi Center in your home if you purchase the full selection of mini-banners. (Note: We need more banners in Atlanta, my Southeast Division Championship is getting lonely up there on the wall.) 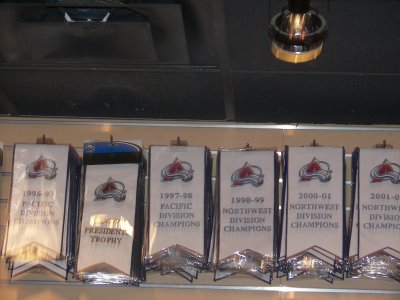 Conclusion: All and all I fun game. A lot of energy in the crowd and the snowy atmostphere outside made it really feel like hockey time. This spring the NCAA Frozen Four will be here at the Pepsi Center, so if you want to see the best of college hockey you might consider making the trip.