Well this Thrashers blogger is hitting the road tomorrow and traveling up north for three hockey games in three nights. First we will visit lovely Nashville the Athens of the South (complete with its own full sized Parthenon) and re-connect with fellow stat blogger The Forechecker. I've seen about 6-7 NHL games in Nashville and always enjoy it there because the building seems more intimate than some other places (like say the Pepsi Center).

Last year's road trip featured stops in Pittsburgh and Buffalo and included Adventure Cat. Sadly Adventure Cat is staying home this time but I'm sure she will be curled up at home watching the games on CenterIce. 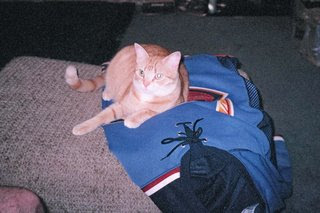 Then Friday I will look in on the young guys playing for the Chicago Wolves. Of course Chad Denny and Grant Lewis are not actually playing for the Wolves on a regular basis (hard to develop in the press box) so I'll be taking a good look at forwards Jordan LaValle and Tomas Pospisil. Hopefully Nathan Oystrick has recovered from a poor pre-season.

Thrasher Garnet Exelby will be dropping the puck for this game and will be honored as part of the 2002 Calder Cup winning team (I was at Allstate Arena the night when they won the Cup in Chicago that year!)

Saturday it is off to the United Center to see our Thrashers continue their November tour of North America. I'm not a huge fan of the home of the Blackhawks but I do have some found memories of watching Brett Hull score two goals in a wild 4-4 game in the early 1990s there. The franchise seems to have found new life lately as their rookies have played well so far this young season. This game will not be televised at all, so even CenterIce subscribers are out of luck on this one.

Of course I'll be taking advantage of the great eateries in the Windy City such as the deep dish at Gino's East and Chicken Pesto sandwich at Cosi. I think a visit to the Museum of Science and Industry is also in order. They have a special exhibit The Science of Star Wars which includes a full scale mock up of the cockpit of the Millennium Falcon