Sorry for the quiet blog lately, but there is little Thrasher news these days and even a blogger needs a break once in a while. Besides I've been busy crunching numbers for my season preview of the Eastern and Western Conferences. So more material will be posted as the NHL Camp rolls around.

Generally I find reasons to like most players on the Thrashers roster, but like everyone I have a couple of not-so-favorite Thrashers. Two of my least favorite Thrashers recently signed with other teams. I loved J.P. Vigier's effort and determination but sadly the NHL requires more than a big heart and Vigier is just not fast or big enough to be a regular NHL player on a good club.

The other guy I am happy to wave farewell to is Andy Sutton who signed with the Islanders. A guy that big who plays that soft ought to ashamed of himself. His inability to turn his head and identify the wide open guy standing on our goalie's blindside was the single greatest source of frustration for me the last two seasons. If you're not a terribly mobile defenseman and you're not going to hit anyone at least pay attention to that guy camped on behind your netminder waiting to put the puck in the net.

With the departure of Mr. Sutton I also have one more chance to post my favorite bit of hockey art one more time. I want to thank the Friend-on-the-blogger for making it, the picture makes me laugh every time I look at it. So one more time, I present to the SuccuSutton. In case you missed it before a SuccuSutton is a feared magical creature that sucks the life out a team, they are to be avoided at all costs. 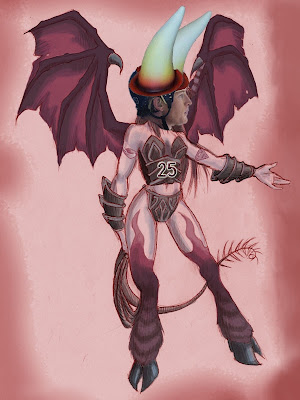